I’ve made a happy reading discovery. His name is William O. Steele  (1917-1979). He was the award-winning author of historical fiction for children written in the 1950s, 60s, and 70s. Particularly fiction set on the 18th century frontier of Tennessee. That’s why I’ve just discovered him, because I’m writing a novel set on the eastern Tennessee frontier in the latter quarter of the 18th century, and it’s always part of my research process to scour my local library and Amazon for novels set in the time period and setting I’m writing about, both for inspiration, a broader view of time and place, and to be sure I’m not writing a book that’s already been written!

Thus it happened that I found William Steele, and his book The Man with the Silver Eyes. 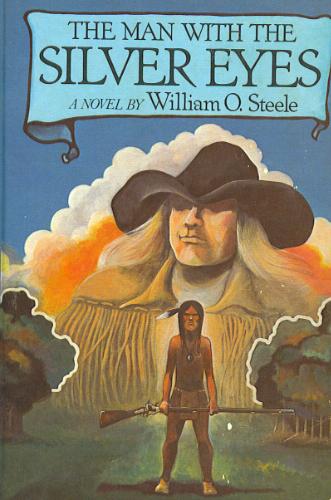 “Talatu (which means “the Cricket” in the language of the Cherokee) has spent his young life hating the whites, who have taken his people’s land and driven them deep into the wilderness. He is stunned when his beloved great-uncle tells him he must accompany Shinn, a white man with the palest eyes Talatu has ever seen, to the settlement of Watauga, where he is to spend a year with him. Autumn becomes winter as Talatu continues to despise the white Quaker who attempts to live in peace with his frontier neighbors, and he dreams of joining his warrior uncles in attacks on the white settlers.

Set against the backdrop of the raging Revolution and the tensions of frontier living in 1780, William O. Steele has written a memorable story about an encounter between a young Cherokee boy and a white Quaker trader culminating in a confrontation that transforms Talatu from a sullen and suspicious boy into a resolute and courageous man.”

~ from the book’s jacket flap

Child-me would have adored this story back in 1976, when it was published. She would have gone on to devour every book this man wrote. It was in 1978, after all, that I wrote my first story about a Lakota girl called Yellow Feather, and the wounded mustang she nursed back to health, tamed, and rode in a race to win a prize. I do wish I’d discovered him back in the 1970s when the first stirrings of this frontier fiction lover’s wee heart were being fed over and over and over again by the Little House books (always wishing Laura would run off to visit the Indians her Ma so feared).

Grown-up-me is still hungry for books like The Man with the Silver Eyes, in which characters from different frontier races, or those caught between races, overcome monumental differences in culture and world view to find the common ground of friendship. Better late than never, I say, to have found Mr. Steele’s books. And with titles like the following listed on this book’s “by the same author” page, I will be spending many enjoyable hours visiting Mr. Steele’s frontier world.

The Man With The Silver Eyes at Amazon

← When family history mirrors fiction (or the other way around?) Home stretch →